Before we jump into the question of what’s next, let’s quickly recap where we have been.  Here’s a recent chart to kick us off. 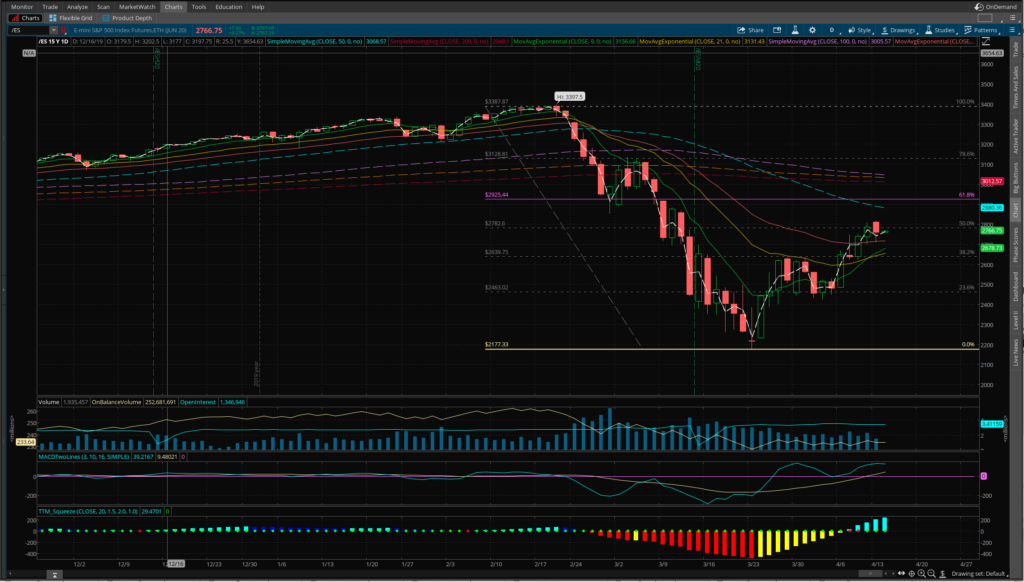 In late February, the market hit a high of 3397.5 in the S&P Futures.  As the corona virus spread in the United States, the market dropped sharply to about 2180 – a 36% drop in a month.  Since then, the major market debate has been, will we re-test the bottom – meaning does the market have to revisit the low of 2180 before rising, or not?  If you watch CNBC, most were in the re-test camp.  Needless to say, pessimism was high.  Tony Dwyer, Chief Market Strategist for Canaccord Genuity, argued that when there is a crash, there are three phases that must occur.  The first is the panic – the 34% drop.  Then, there is a multi-week relief rally, which we are in the middle of now.  The median bounce off the low is 17%.  Then, if certain indicators are hit, you re-test the low.  Tony quotes the RSI index, which hits a high of 22 during the week ending March 20, 2020.  When this happens, a re-test of the low occurs a median of 28 days after, he notes.  Or at least, that has been the historical experience.

Who will be right?  Impossible to be sure, of course, but let’s look at. a few more details.

Where do I fall in this mix?  I look at it this way.  The market always has a “base case” its head, though unfortunately, we can only guess what that base case is.  And keep in mind, the market is forward looking.  Two weeks ago, everyone was very negative.  But, many, including the often quoted Governor Mario Cuomo of New York, were predicting that corona cases would peak in mid-April.  So I think the market rallied in anticipation of this hope.  Interestingly, even during the first 10 days of April, the market rallied even though the corona numbers were getting worse.  So the only explanation is, the market was rallying on the hope of better days.

Also, notice in the charts that the market first rallied to between 23% and 38.2% in early April.  This is the potential failure range quoted by Tom Lee.  The market stayed in this range for a short while, and then broke to the upside.  I believe this is because of the government stimulus and Fed action, giving investors confidence that government will do whatever it takes to get through this crisis.

So far, it does look like Tom Lee is right.  But, we are already at the 50% bounce level, so where to from here?  Even though the bottom may be in, we may still dip from here.  Consider the possibility that in the next month or two, things might be worse than what the market expects.  We may get a second wave of corona cases, earnings may still be terrible, and the most significant factor, I think – the recovery could take longer than expected.  We could still dip or see volatility in the near future, since we are still far from a vaccine or a successful treatment for corona.

I think, most likely, we will trade in a range for the near future.  Taking a look at the charts, I’d estimate the range 2640 – 2950.  And in the meantime, I’m looking for anything that may change the outlook.