Sadly, for some reason this is another post that I thought I had published, but apparently did not.  Not sure why that is happening, but apologies to readers for the confusion in timing.  This was written May 14, 2014.

Often, the day after a big rally reveals more than the day of the rally itself.  Monday we had a big rally – and everything rallied.  Today, Tuesday, we can see what is strong, and where the cracks are.

The SPX and the DOW hit highs in the last week.  Even as momentum stocks and biotechs fell, the S&P and the DOW held up well, and dips were bought.  Often, a rule of thumb is, as markets stay at high levels, it is likely that they will continue going higher.  And so it was this week, with the SPX hitting touching 1902.17, a new high.  This is a bona fide breakout for the S&P, albeit a small one.  This denies the potential head and shoulders pattern that was setting up, and sets up a medium term target of about 1924.  Together with other smaller wings, the target range is 1910-1924.  The target off the latest swing was 1903.60, and having hit 1902.17, we may already have gotten as far as we can on that swing.  In any case, the S&P and the DOW remain strong for the time being. 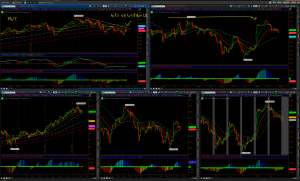 The story is less clear for the NASDAQ and the small cap Russell Index.  The NASDAQ actually held today, but the Russell hit resistance and sold off.  Many are betting on more downside.  But what is clear is that divergence will continue for the time being.

The longer term question is, of course, what will happen going forward?  If you look at the history of the S&P versus the Russell, they have traded in tandem for the last decade.  But, back in 2000, the Russell dropped while the S&P went on to new highs.  So, that scenario is less likely, but still possible.