It’s funny, there are lots of people getting on CNBC saying how orderly things are.  And yet, the swings in the last week seem rather dramatic to me.  Perhaps not because of the amount, but the sudden and surprising reversals.  Today, Tuesday, we tested support at the low of 1814, and then suddenly reversed to the highs of the day.  That doesn’t happen very often in markets. 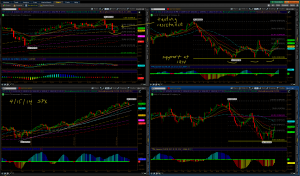 So a few days ago, I was looking for the S&P to to test the 150-day at 1800 or so.  The futures actually hit this level Sunday night, but the index itself found support around 1814.  Since then, it has tested that level three times.  Now, the S&P is running toward upward resistance at 1843, which is the 8 EMA and the 50-day moving averages, and 21- and 34-day EMA just above that.

It’s hard to say what the market will do here.  We could well hang in this range as earnings unfold.  Also, many parts of the market are due for a bounce, and it wouldn’t surprise me if the market decided that it was time to pressure the shorts.  Companies may have racheted down expectations so much that they will beat, so that could favor the bulls over the next few weeks.  Finally, hitting 1814 three times and bouncing argues, at least for a little bit, in favor of the bulls.   Still, we will have to see if the bulls want to push through resistance badly enough.

In the meantime, big cap tech and oil continues to be favored.  The sectors that have been pounded – momentum, biotech – look like they want to take a pause here.

For me, moments like these are difficult to trade.  The long term investor would hold and would trim if the market begins to fail at resistance.   Very little is clearly cheap, and even those stocks that seem cheap may go down further.  The swing term trader doesn’t have much of a trend to work with because the bounces within the range last only for days.  So perhaps patience as the market