Obviously, Friday was bearish for markets.  Many, especially CNBC, blamed it on Russia, while others just called it rotation.  I think it’s more than that, for several reasons.

The main one is that this week, markets rallied into resistance and sold off quickly.  This is generally a bearish sign, but more importantly, many indices failed exactly a downward trendline.  This, more than anything confirms the downtrend in those indices.  It also makes it harder for the rally to resume in these indices.

The question then becomes, who is going to buy?  Who will step up?  It seems like it’s getting harder to find buyers.  Many, including me, were surprised by the selloff in Facebook (which I am long).  Despite what almost all considered an impressive quarter, the stock sold off considerably.  Likewise, Netflix, which showed growing international numbers, sold off on news that HBO was going to be allying with Amazon for internet distribution of older HBO shows.  One might expect a decline on this news, but the important thing is that (1) the new wiped out any gains from the earnings news; and (2) the selling continued in the following days.  On Friday, almost all sectors except utilities were down.

As noted in my last post, a downward correction starts with a rotation.  I said that the rally could resume if buyers stepped into the failing leading sectors.  This week proved that buyers are still selling the former leaders.  In this situation, the new leaders have to rise even more to keep the rally going.  I’m highly skeptical that the new leaders – energy, old tech – can continue this rally alone.

Let’s take a look at some charts that demonstrate the points discussed above.  Here’s the S&P: 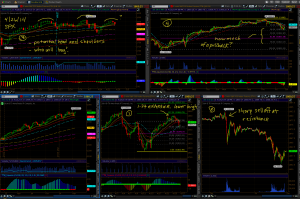 1) In previous posts, I noted how the S&P bounced off a triple bottom.  Here, they rallied to the 1.27 extension (127%), which was resistance and sold off.

2) Notice how in Thursday,  the S&P sold off sharply as soon as it hit resistance, followed by more selling the day after.  This is a common sign of bearish conditions.  In a more bullish environment, the market rallies to resistance, but is more likely to hang around resistance or to make several clear attempts before reversing.

3) As mentioned in the last blog, we may have the beginning of the right shoulder of a reverse head-and-shoulders formation, which is classically bearish.  We can’t really say it’s certain, and the market may still push against resistance.  The key is whether the market fails at a high lower then the last high.

4) For the short term, we are looking to see where the S&P will find support.  The most likely support area is the 61.8% area, though anywhere from 50% to 78.6% is possible.  Below 78.6%, the probability of failure increases dramatically.

The S&P and the Dow are the strongest of the indices.  But to see the current bearishness, the NASDAQ is a better view: 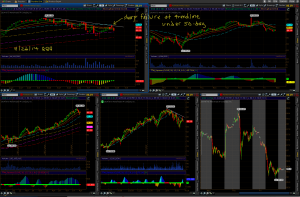 You’ll see in this chart that the NASDAQ, as represented by the QQQ, fails decisively at the white downward trendline at about $88.50.  This also coincides with the 50-day moving average (blue dashed line).  This failure indicates that bearishness in the NASDAQ is likely to continue.

The thing is, many sectors look exactly the same, especially the former leaders – healthcare and small caps (Russell index): 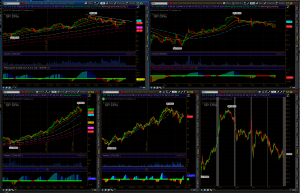 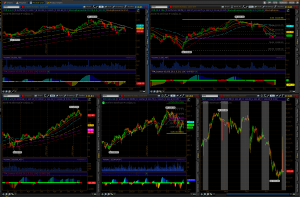 In my opinion, this week signals a resumption of bearish conditions.  This doesn’t mean we’re headed off a cliff, by any means, only that the probability of new highs in the short term is falling.  As as more sectors continue to decline, we need more and more reasons to head back in the other direction.

I hold positions in the SPY and the IWM.