Since we’ve had a rotation, and because we may be entering a correction, I thought it might be worth looking at what causes a rotation and what causes a correction.  By the way, my hypothesis (not proven) is that most corrections begin with a rotation, but of course, not every rotation becomes a correction.  Also, let me note that it’s unclear whether we are in a correction or just a pullback.  While the selling is more serious than it has been in recent memory, it’s not clear at all how far the it will go.  At least, understanding the drivers of the current sell-off will give us an idea of what to look for as the market progresses.

Here’s my list of factors that are driving the current sell-off:

(1) The end of quantitative easing (QE).  This is, of course, the easiest and most prominent cause.  You will hear the bulls argue that QE, even with a steady reduction of only $10 billion per month over 8 to 9 months, is still expansionary.  That is true, but the end of QE means reduced liquidity in the market.  The only real question is when the effects will be felt.  My theory is that by itself, the $10 billion monthly reduction in asset purchases by the Fed is easily digestible by the market and the effects would not be felt until the last few months of the program.  However, if other macro factors dim the economic outlook, then the effects of QE could be felt much earlier.  In other words, the end of QE, in combination with other factors, can help drive a sell-off.

(2) Concern with Q1 Earnings.  Over the last several months, many companies have issued negative outlooks.  As a result, earnings estimates have been coming down.  In early January, Q1 2014 earnings growth was estimated to be 2.3%.  Now, the estimate is -2.6%.  The chart below from Zacks shows the evolution of earnings estimates since the beginning of the year: 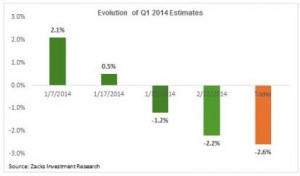 (3) Increasing global growth concerns.  By now the litany of global growth concerns should be quite familiar.  China has been slowing down, but the market has now come to accept that growth in China is likely to be under 7%.  Some, such as the IMF, maintain growth targets at 7.5%, but I think the market consensus is probably around 6.5% – 7.0%.  The critics think it’s even lower – that the real growth rate in China is 4-5%.  The recently installed Chinese government has also shown that the print-money-to-maintain-growth attitude is a thing of the past.  Moreover, the Chinese economy is likely at the point where printing money will cause more problems than it solves.

Europe also seems to be slowing down.  Politicians remain unwilling to take the hard action needed to spur growth.  Combine that with the tension between Ukraine and Russia, and you have little hope for significant progress in Europe.  Many remained concerned about possible deflation in Europe.

Lastly, the US is slowly improving, but hardly enough to be a driver of global growth.  In fact, many question how well the US economy is actually doing.  While many have been willing to accept the polite story that the winter weakness in jobs growth and retail sales was due to weather, the market seems to be less willing to do so now as the reality of earnings hits.  The IMF has a 2014 growth target of 2.8%

In sum, there doesn’t seem to be a strong driver for future growth in the immediate future.  There’s no major crisis at hand, but world economies are puttering rather than spurting forward.

(4) Valuation Questions.  A little while ago, I wrote a note about the 2014 expected earnings picture.  At that time, I noted that the market at recent highs was trading at about 16x forward earnings and 17.2x 2013 earnings.  Considering that the long term average is about 15x, this was considered full but not necessarily rich at the time.

Let’s take a quick moment to revisit the earnings picture.  While Q1 earnings estimates have come down, full year earnings expectations have not really changed for 2014.  This is a bit counter intuitive, because you would think that analysts would adjust the full year estimate based on a reduction in Q1 estimates, but this is not the case.

So 15.3x seems reasonable compared to a 15x historical average.  But there are two issues that must be addressed.  First, what’s the right PE for the market without QE?  If growth is weaker than previously thought, even 15x may be too much.  And second, what if earnings fall below expectations?  If we have a weak summer, then the prospects for hitting 2014 targets dim.

Truth is, it’s difficult to know what the right PE is, or for that matter, where the economy really stands.  And, I’m not saying that a 15x PE is wrong.  I suspect at this point, that the market is willing to sell off somewhat just to be safe.  That’s because if the economy is weaker than thought,  15x PE without QE could well be too much.

(5) Overvalued Sectors, Crowded Trades.  There’s been much talk of bubbles in the popular internet and biotech sectors.  According to Bank of America Merrill Lynch strategist Savita Subramanian, biotech and internet EV/Sales multiples have tripled and doubled over the last two and a have years, and they are now a total of 8% of US market cap.  Moreover, the median biotech stock trades at 24x sales, and these sectors are overweighted in managers’ portfolios by 50-60%.  As QE ends, and as concerns about growth and valuation increase, those with profits over the last two and a half years are selling these crowded sectors and reducing their exposure.

While I don’t advocate investing based on these types of market interpretations alone, current economic conditions actually imply that the election cycle pattern will play out this year – at least so far.

(7) Tax Selling.  Of course, tax selling happens every year – investors sell profitable stocks to pay for their tax bill.  While I don’t consider this a major factor by itself, I think of it as a contributing factor in the current sell off.  Also, tax selling this year could be heavier because of the gains in the market over the last year.

In the next part of this series, how to trade this changing landscape.